If you’ve ever heard of Cincinnati Chili you probably know it’s not really chili. It is neither the bean heavy stew or the meat and spice version. It is however delicious and I haven’t had it in ages. You can do an internet search, but in short it’s a meat and spice heavy sauce served over pasta, almost always spaghetti, with cheese (and often onions and beans). Wikipedia has a long section on how it is made in different “ways”.

My family used to make it at home but I never got the recipe and I think it is lost to time. But I found a recipe a while ago that fairly well matches my recollection of the ingredients. Tonight we made some (with heavy modifications for our cabinet and to make it vegetarian).

These started from the recipe I found but modified heavily from my memory and our kitchen contents. The main differences here are I scaled this down to the amount of “ground beef” we had on hand and I adjusted a bunch of spices based on what I remember (and what I know I like). The main changes here is I put in a lot more of most spices (other than chili powder) than the linked recipe calls for.

Cook the onion in oil (say olive oil and coconut oil for that saturated fat goodness). Add the dry spices (except bay leaf) and let cook in oil. Add “ground beef”, liquid spices, garlic, bay leaf, stock and tomato sauce. Let it cook down for a while. It did not take hours like the above recipe to get to the texture I wanted (chunky and not too runny).

Meanwhile, grate some cheddar, dice up some onions and cook some beans (we’re making five-way, though normally I think you’d see red or kidney beans). When the main sauce is nearly done, cook some pasta. We made elbows because that’s what we have (and rice noodles seemed a bit too far), but long spaghetti is traditional. Serve some pasta in each bowl, add the main chili on top, then sprinkle a bunch of cheese, beans and onions. Enjoy! 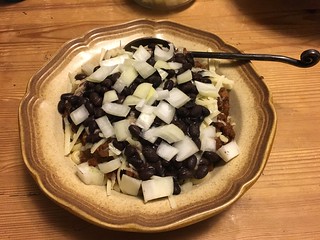 Yes, this doesn’t look like much. But it was really tasty and very similar to what I remember. The “beef” was a good texture. If we make it again we might add even more spice (not just chili powder) and I should have chopped up the onion for the topping smaller. But still mmmmmm tasty.