I made pumpkin pie for the first time this Thanksgiving with my mother-in-law using the Bittman recipe. She then sent me her preferred recipe. This is what I did to make a version with eggnog.

First I compared ingredients and ratios. Eggnog already has egg and spices in it. These two recipes were also fundamentally different in the base ingredients: 6 eggs vs 4 eggs and 4 cups of milk/cream/half-and-half vs 3 and 1/3 cups. The spices were also very different. Somehow the Bittman “How to Cook Anything” app version only calls for 1 teaspoon of cinnamon (among other spices) for two entire pies while my mother-in-law’s preferred recipe (used for many years at family holidays) called for 2 teaspoons. The other spices were similarly far less. The pies we had at Thanksgiving were a bit bland even to my taste and my mother-in-law even adds extra to her recipe! Eyeing those recipes, I baked two pies with these ingredients:

Given that the ratios of the major ingredients are closer to my mother-in-law’s recipe, I’m baking it off as that recipe specified. Preheat oven to 425F, bake for 15 minutes, then turn down to 350F for 45 minutes or until a knife comes out clean. Result: 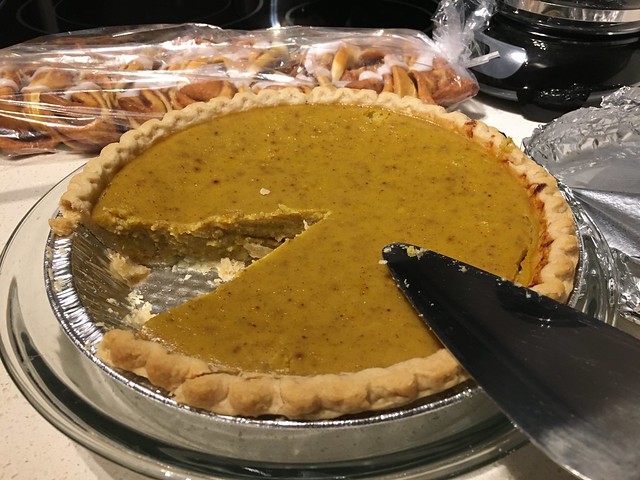 The result was very fluffy. I fear it may have slightly curdled, but it was still very tasty. The Bittman recipe calls for only baking (at a lower temperature) for less than 50 minutes. There was still not enough spice. I’m not sure the eggnog added much objectively, but it’s emotionally satisfying.